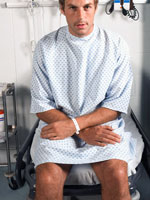 Most guys have worried about spraining their penis at one time or another. While most of these concerns have little basis in reality, recent news reports have brought one serious but rare issue to light – penile trauma. Many men don’t know much about how this can happen or what it can cause if it happens more than once, but the fact of the matter is, trauma can not only be incredibly painful, it can lead to long-term issues that affect how well a man can perform in bed.

Trauma and the Penis – A Brief Overview

When the penis is erect, two cylinders called the corpus cavernosum within it are filled with blood. These cylinders are very sponge-like and so they swell and, once engorged, become rigid or hard. If the penis is suddenly bend or receives blunt force when erect it can rupture the lining of these spongy cylinders, effectively causing a sprain. This type of injury can also cause a rupture in the tunica albuginea, which is connective tissue that surrounds the corpus cavernosum and lays just under the skin of the penis. When either – or both – of these tissues are ruptured, the pain is excruciating and the problems can be serious.

Although this is uncommon, one man recently made headlines when he was admitted for such an injury. In March of 2015, the British newspaper The Mirror published a story about a 42 year old man who injured his penis during sex and fractured the tunica albuginea, or outer tissue of his penis. How did it happen? According to the report in the New England Journal of Medicine, he had been having sex with his partner and miscalculated on one of his thrusts. As a result he rammed right into the woman’s perineum, the area between a woman’s vagina and her anus.

The patient was taken to the local Emergency Room and doctors there determined he needed corrective surgery in order to deal with the rupture. His surgery was successful and his post-operative care helped to ensure that he had a minimum of plaque, or scar tissue, build-up as a result of the injury, but many men aren’t this lucky.

This case was extreme in that it required not only a hospital visit, but also surgery. But many men have experienced a miscalculation while engaging in sex and have hit the perineum or the area where the thigh meets the hip – it happens. And usually, it hurts but the man only needs a few days t recover and he’s good to go. Repeated episodes like this may not hurt substantially as they happen but they can cause a build-up of scar tissue, called plaque, which can eventually create a condition known as Peyrione’s Disease.

Peyrione’s Disease is diagnosed when a man’s penis begins to bend or develops lumps of scar tissue under the skin where the connective tissues have been sprained or ruptured and have healed over time. These bends or bumps are sometimes nothing to worry about and men don’t even think about it but in other cases, they can make erections painful or diminish a man’s sensitivity, ability to orgasm and his overall pleasure. Surgery is an option for some extreme cases but penis traction offers many the opportunity to treat the condition themselves.

Penis traction as a way to treat Peyrione’s Disease can be done with devices normally sold in order to improve length and, in fact, men with this condition usually find they do gain more length when the curvature is corrected through penis traction. Even when this option is available, men should still seek out advice from their doctor in order to ensure no further damage has been done and as a way to monitor progress more accurately.

Men who find they often ‘bump’ into things they shouldn’t during vigorous sex may not worry much about it since it doesn’t always hurt that much, but even minor traumas can cause big problems. For those who end up developing painful curvatures due to the trauma, penis traction offers a way to correct the issue and regain their original length.