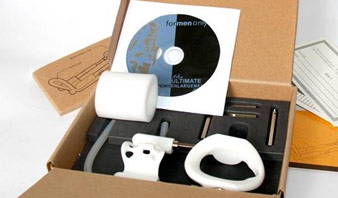 The Pro Extender has received accolades for being of the best extension devices on the market. However does it really live up to its promises?

Our Ratings for ProExtender

What makes the ProExtender #5

The device came in a plain, unmarked brown box and was free of any wear or damage from shipping. After opening the box however the first sign of trouble became apparent. Although the device itself was shipped in a very slick-looking carrying case similar to the one advertised on their website, the case itself was made of what seemed like very cheap nylon. The case even had a small tear in it and the plastic zipper actually broke after only a handful of times of it being used.

The instructions to for the Pro Extender device were clear, easy to read and came in several languages. Out of all the extension devices that were reviewed, the Pro Extender had one of the simpler manuals. We also received two spare rubber straps for the device as well as promised on the website. Unfortunately, the package does not offer enough spare parts of accessories to properly follow the program. The user will be forced to purchase additional spare parts in order to continue the treatment and thus adding significantly to the overall cost.

Many of the very top quality penis extender devices that we have reviewed had been clearly made with highly sturdy and in some cases, medical grade materials. Although the Pro Extender seemed to be made with very sturdy plastic, it has never been marketed as "medical grade". Although after three months of use the device still showed no sign of actual degradation of the material, the device itself still seemed lighter than we thought it should have been. A penis extender is obviously used on the most sensitive parts of a man's body and for being one of the highest priced extenders on the market, we did expect more from the quality of material that was used to make it.

The Pro Extender device did deliver on results. Actually, it has ranked fifth in our list of best results for all of the devices reviewed. The device was used for the recommended 90 days, and did show significant results. After the 90 days the user reported an increase of nearly 2 inches to the penis when erect and approximately a 10% increase in girth. However, the user also reported that because of the uncomfortable single only rubber strap used to secure the penis in place, he developed bruising at the end of the penis after several weeks.