Over the years research has shown a definite correlation between the quality of sleep and how much we enjoy the rest of our lives. Sleep deprivation is linked to things like depression, anxiety, excess weight gain, diabetes, heart disease, and so much more. But now, according to a brand-new study out of Walter Reed National Military Medical Center, men with sleep issues also experience decreased sex lives as a result of poor performance and the loss of libido.

The study focused on 92 men, mostly in their 40s, who were diagnosed with obstructive sleep apnea. This is a condition in which the airways in the back of the throat constrict during sleep, temporarily interrupting breathing long enough to cause the individual to quickly wake up. It is a condition that can be treated relatively easily with the use of a CPAP machine. This machine continues the airflow throughout the night so apnea patients can remain in deep sleep.

Walter Reed researchers assessed the study’s participants for sexual performance and satisfaction before beginning CPAP treatment. They found that an astonishing 46% had been diagnosed with some degree of ED; another 27% complained of loss of sexual desire. The two components combined to indicate that the vast majority these men were not satisfied with their sex lives overall.

Each of the men was reassessed after one, three, and six months of CPAP therapy. Surprisingly, the sexual satisfaction of most of the subjects increased as CPAP therapy continued. Of those suffering from ED, some 72% reported measurable improvement in the ability to achieve and maintain erections; 41% of those men said their sexual function returned to normal. Overall, 88% of the men reported greater sexual function and satisfaction after six months of CPAP.

Correlation between Sleep and Sexual Function 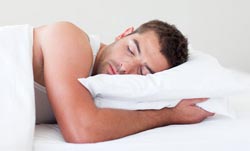 Researchers were not surprised much about the decreased sexual satisfaction of men suffering from sleep apnea. However they were surprised at how drastically improved sleep affected sexual function and satisfaction. Simply by putting men with sleep apnea on the CPAP machines researchers were able to return sexual function and desire to normal levels.

There may be several reasons behind this, though none have been proven conclusively today. Consider the following possibilities:

For men whose loss of sexual desire and function is largely due to sleep apnea, CPAP treatment can be enhanced through the use of a daily herbal supplement. Male enhancement supplements include herbal ingredients that have been used for centuries by doctors on every continent. These ingredients increase the body’s ability to create seminal fluid, encourage the body to naturally produce more testosterone, help a man remain more alert, increase energy levels, and just help him perform better overall.

The combination of the CPAP and a daily supplement can improve the sex lives of most men under normal circumstances. That, in turn, will help create healthy relationships between men and their partners. As an added bonus, research shows that both men and women involved in healthy, long-term, monogamous relationships also maintain better overall health even into their senior years.

If you suffer from sleep deprivation and a loss of sexual satisfaction, make an appointment to see your doctor right away. That’s the best way to determine why you’re losing sleep and what can be done about it. Be sure to ask about supplementing your sleep treatment with a male enhancement supplement as well. It could be one of the best decisions you’ve ever made.